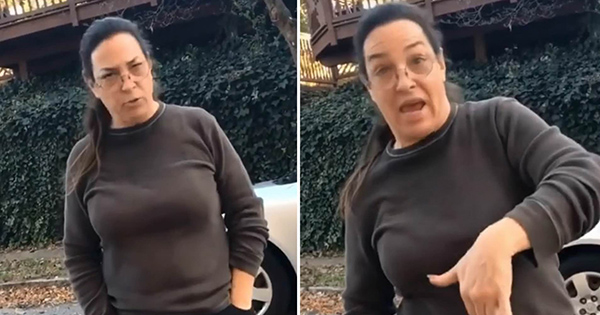 Atlanta, GA — A video of a white woman who called the police on Nedrick Peters II, a UPS seasonal worker who is Black, because he apparently made her nervous while he was doing his job delivering packages in a neighborhood in Atlanta, Georgia has gone viral and sparked outrage on social media.

Peters shared the video of the incident on his Instagram account. The woman, who has yet been identified, can be seen approaching Peters who was delivering several postal items at that time.

“I’m going to need someone’s information to check up on you, because I don’t understand why you’re walking around this neighborhood with a bunch a packages,” the woman said at the start of the video.

When Peters told the woman that she is bothering him, she claimed that the man’s presence made her nervous. She said, “I’m not bothering you. I want to complain to UPS that you look very suspicious and making me nervous.”

The woman then continued justifying her actions, citing previous break-ins that recently happened in the area.

“No, let me tell you why. My car’s already been broken into twice. And guess what? It’s a really big thing in this neighborhood for people to walk down the street for vandalism,” the woman said.

When the woman demanded Peters to tell her his name, he refused. The woman went on to tell him that she would follow him wherever he would go throughout his route.

“Like I said you look very suspicious and I’m trying to tell you, you need to at least be able to tell people who you work for,” the woman continued pressing.

Upon hearing that, Peters turned the camera around to show what seems to be a company-issued jacket with the official logo of UPS. He also showed his work dolly with several packages for delivery.

The woman then returned to her home but came back to Peters to take pictures of him.

A second video showed the woman saying she has called the police while another UPS worker came to talk to her. It has yet been known what happened after the video ended.

Since the video was posted, it has been viewed over 4.2 million times and shared across social media sites. Several people expressed their disappointment with the incident.

“This man deserves a raise for keeping his cool. Nobody should be harassed for doing their job while black,” one wrote.

“If a man was making me nervous I surely wouldn’t confront him alone, insult him and then tell him where I live,” another said, emphasizing that the woman, despite saying she was nervous, still approached Peters.

TikTok Apologizes For Claims It Is Suppressing Black Voices

TikTok Apologizes For Claims It Is Suppressing Black Voices