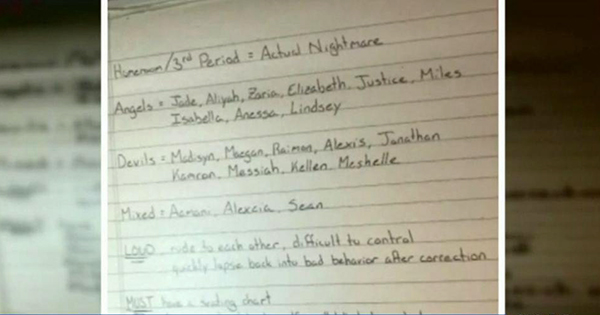 Atlanta, GA — A substitute teacher at Bernard Awtrey Middle School in Atlanta has been fired after allegedly writing a note describing Black children as devils and white children as angels. Black students at the school took pictures of the note and showed it to their parents.

Shocked and disappointed, one of the students’ parent contacted a local news station CBS 46 to share what had been discovered.

The parent also posted about the incident on Facebook saying, “And please, if you’re reading this… don’t say how you’re sorry this happened to my son who is a straight A student, comes from a two-parent household and flies planes in his spare time. Instead, think about how you can remove your unconscious bias and racist motives before you step out of your home and engage with anyone who doesn’t look like you.”

The school district confirmed that the involved teacher, whose name was not released, was already fired.

A district spokesperson said in a statement that the “school administration was made aware that the substitute composed two lists, one titled ‘angels’ and the other titled ‘devils.’ The names of black and white students appeared in both columns. The District doesn’t tolerate any adult we employ making comments which are disrespectful in any way.”

Tennessee Sheriff Uses N-Word in Phone Call But Vows to ‘Apologize to All the Citizens in the County.’ Sure, Jan

Tennessee Sheriff Uses N-Word in Phone Call But Vows to ‘Apologize to All the...