Reclaiming Mine
Home African American news Police Officers Who Tied Up Homeless Black Man With a Rope Will... 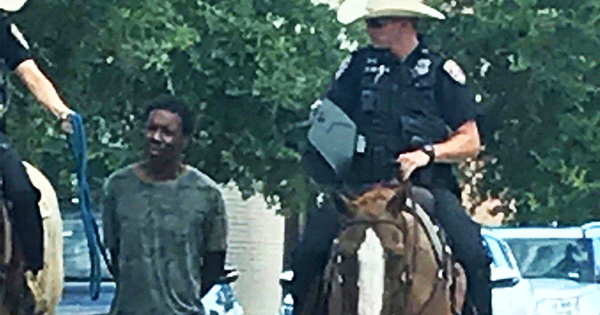 Galveston, TX — A disturbing video showing Donald Neely, a 43-year old Black man who reportedly suffers from a mental disorder, tied on a rope while handcuffed between two police officers on horseback has caused national outrage and calls for the officers to be fired with people claiming they have treated him inhumanely. However, the officers will not even undergo criminal investigation.

After reviewing Neely’s arrest, the Texas Rangers Division, a faction of the state’s public safety department, issued a statement saying that “there was nothing that warranted a criminal investigation.” The division added that the officers “had not violated the law.”

Neely, who struggles with bipolar disorder and schizophrenia, had been living on the streets in Galveston for almost five years despite his family trying to move him back home. He had been arrested 6 times this year prior to his recent arrest on misdemeanor criminal trespassing charges for allegedly trespassing in a commercial neighborhood.

A bystander captured the disturbing scene wherein two white officers on horses were seen leading a Black man with a rope to transfer him to another location. The video later went viral on social media, causing outrage as the incident was likened to the treatment of captured slaves.

The Galveston Police Department was forced to apologize after a photo of the incident began circulating online. In a statement, the police department tried to defend the two officers by saying no transportation units were “immediately available at the time of the arrest” and that they were only “escorting” Neely.

Police Chief Vernon Hale wrote his own statement saying that the officers, identified only as P. Brosch and A. Smith, had used the “trained technique” with “poor judgment” and caused Neely “unnecessary embarrassment.” He did not mention any punishment for the two officers.

“My officers did not have any malicious intent at the time of the arrest, but we have immediately changed the policy to prevent the use of this technique and will review all mounted training and procedures for more appropriate methods,” he said.

Meanwhile, Neely’s lawyer, Melissa Morris, claims that the officers involved were not following the department’s policies as she “[doesn’t] believe there was such a policy, especially not in writing, that would have allowed for this in the first place,” she told The Washington Post.

“What they did was real inhumane,” Neely’s brother, Andy Neely, told KPRC. “They treated my brother as if he was a dog.”