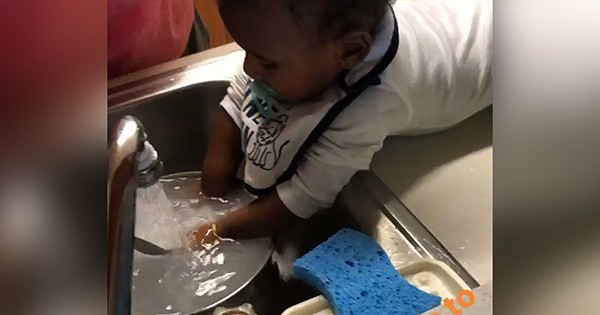 Baltimore, MD — A short video of a cute 9-month old baby who was washing the dishes has gone viral on social media. People all over the world are impressed and amused over the little boy who, thanks to his grandmother, has started early on with his household chores.

Arabia-Iman Tillery, the boy’s mother, posted the video on Twitter. In the video, the baby can be seen laying over the counter washing off utensils and sucking a green pacifier while his grandmother is speaking on the phone.

“My mom has my 9 month old son doing dishes,” Tillery wrote on the caption of her post.

The video has so far garnered more than 5 million views since it was posted.

“My mom got him to work already,” Tillery wrote on the video, wherein the baby can be seen having the time of his life as he splashes water in the sink. He seemed to enjoy doing it so much that they had to make him stop.

Tillery said that the scene was just a spur of the moment thing in an attempt to have him take a nap.

“My son was getting a little fussy before a nap, like he usually does,” Tillery told TIME. “[My mom] figured he might as well play with water and ‘wash the dishes’ a little, and it worked really well.”

Tillery added that she just wanted to post it just for laughs and she was surprised when it went viral.

“I think the funniest thing of all is that clearly he’s not actually washing, he has no idea what’s happening.”

Novel coronavirus appears to be stabilizing in China amid fears of new outbreak in...