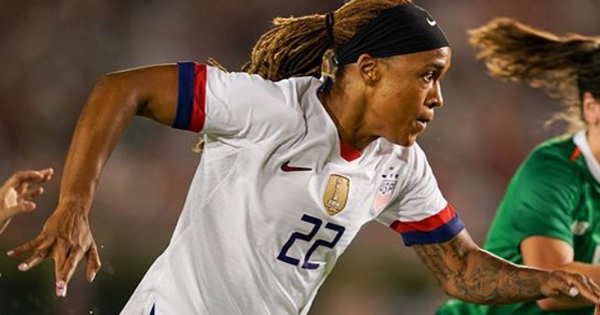 Immediately following that amazing experience, again they boarded a plane. This time they flew to the West coast, whereby Oscar winner Sandra Bullock presented the 2019 FIFA World Cup Soccer champions “the Best Team Award” at the ESPY’s in Los Angeles in front of a star-studded crowd of many excited fans.

In August, the accolades continued to pour in for the ladies of the World Cup Soccer team. Wheaties, in partnership with Serena Williams, announced the release of a commemorative limited-edition box featuring the four-time world champion U.S. women’s national soccer team (USWNT), as they kicked-off their Victory Tour. According to General Mills, “The USWNT has been the most successful women’s team in international soccer history, earning four world championship titles – and this summer in France set a record for the most goals scored with 26 over the seven-game tournament.” Currently, the team is on their last leg of the “Victory Tour” around the country and they are boastfully undefeated!

Jessica McDonald is a very proud member on that championship team! She is the only mother on the team and is also a member of the North Carolina Courage; a professional soccer team in Cary, North Carolina. Recently the team clinched a playoff berth in the NWSL (National Women Soccer League) over the Utah Royals and just ended their regular season at home with a 3-2 victory (Jessica scored two of those three goals) over the Sky Blue FC. With that last home game victory, the Courage clinched their third straight NWSL shield!

After their last victory at home, Jessica was awarded “The Charles Colvard Brilliant Player of the Game”. Last year, she was awarded the Championship Game’s MVP Award and holds the distinguish as the all-time leading American scorer in the NWSL! With the Olympics taking place in Tokyo in 2020, we can only hope that she will be a part of that amazing punch of women as well. The future is indeed very bright for this amazing athlete!

To request an interview with Jessica McDonald, book her for an appearance or speaking engagement, please send an email to jessmcdonald1422.net or jackie@lauderdalemedia.com

About Lauderdale Media:
Jacquelyn Tacke has over 25 plus years of experience in public relations and marketing for the entertainment industry. She has produced fashion shows for MidSouth fashion week, celebrity cruise ships (Tom Joyner Fantastic Voyage), Essence Music Festival, just to name a few. She has worked with several designers from various reality television shows such as: Project Runway (Bravo), Project Runway All-Stars (Lifetime). The Fashion Show and All On The Line via the Sundance Channel; where she was also featured.

Protests Erupt Nationwide Over Death Of George Floyd In Minneapolis

George Floyd’s Brother Calls For Officers To Get Death Penalty: ‘They Executed My Brother’

The RNG Show: The Bushes Have Eyes

Protests Erupt Nationwide Over Death Of George Floyd In Minneapolis

China is embracing a new brand of ‘wolf warrior’ diplomacy