Reclaiming Mine
Home African American news 12-Year Old Black Boy Shot in the Knee By SWAT Even Though... 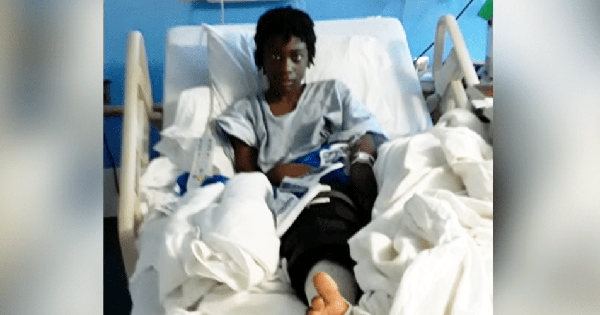 Country Club Hills, IL — Amir Worship, a 12-year old unarmed Black boy from Illinois, will never walk normally again after SWAT officers suddenly entered his home and bedroom shot him without warning even though he already had his hands up.

On the morning of May 26th, a SWAT team executed a search warrant on Amir’s family home to look for Mitchell Thurman, the live-in boyfriend of Amir’s mother who was accused of drug and gun charges. They raided their house holding automatic rifles and throwing flash-bang grenades.

Amir, who was sleeping just moments before, was sitting on his bed shirtless when police officers burst into his room and shot him in the knee as he held his hand up.

His mother heard him shouting in pain after and asked the police what was happening. But she said police lied to her and told her that they “shot someone walking past outside.” They also physically restrained her so she could not help her son. She wasn’t allowed to even go to the hospital where Amir was taken.

The family has now reportedly filed a lawsuit against the city of Country Club Hills in Illinois, the village of Richton Park, and several police officers. The lawsuit claims a SWAT team “needlessly and recklessly terrorized and injured” Amir and his 13-year old brother, who was handcuffed very tightly that it left marks on his wrists.

Because of the shooting, Amir’s kneecap was damaged and he won’t be able to run or walk normally and play sports again. He has been in the hospital several times after his injury got infected.

Moreover, Amir and his brothers have also shown signs of post-traumatic stress disorder, according to the lawsuit.

The family is suing for damages in excess of $50,000, alleging negligence, willful and wanton conduct, assault, battery, false arrest and imprisonment, and emotional distress.

“There is a silent epidemic of trauma being perpetrated upon the children and families of color by Chicago and South Suburban police barreling into the wrong homes, handcuffing innocent adults, holding guns on children, handcuffing children, trashing their homes, refusing to show warrants, and screaming dehumanizing commands,” said Al Hofeld Jr., the family’s lawyer. “Now, children are being shot in their beds.”

U.S. Army Vet Whose Son was Killed on Facebook Live Says ‘Violence Has to Stop’

U.S. Army Vet Whose Son was Killed on Facebook Live Says ‘Violence Has to...

In the camp world of K-pop, it’s hard for stars to be gay